It seems pretty obvious to me at this point that whatever we’re doing to stop these mass shootings isn’t working. Maybe it’s time we tried to do something else.

We can’t ban guns because it says in our Constitution that citizens are allowed to keep and bear arms. Granted, at the time that was written with a feather pen, an “arm” could fire up to three rounds a minute if the shooter was trained and had a lot of practice.

We’re incapable of amending that antiquated clause in the Constitution because a tiny but vocal minority of our population likes guns and refuses to allow the rest of us to ban then for our own safety. Plus, they’re very well funded and in a democracy like ours, that’s important. It shouldn’t be, but it is.

So guns are here to stay.

The Washington Post reports that there are approximately 357 million firearms in the United States. That’s forty million more than there are people.

So if we can’t ban guns, it may be time to do the complete opposite. Allow every law-abiding citizen with a clean criminal record and free of mental defect to arm themselves. Require them to first pass a training course but after that, allow them to strap a firearm to their leg for everyone to see. It would be important that the firearm is easy to see to act as a deterrent, hence the leg holster. 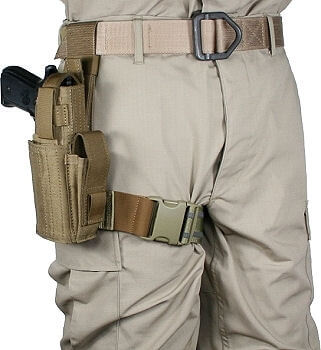 I am in no way saying this is the perfect remedy to this terrible problem. The thing is, it’s better than what we’re doing now which is absolutely nothing. Either make all guns go away or allow everyone to use them.

I’m from California. I live in Maryland. I love B-52s, science fiction, and rooting against your favorite sports teams. Continue Reading...