The long national nightmare is finally over. YouTuber Jeremy Hambly and male feminist Matt Loter reached an out-of-court settlement. Hambly accused Loter of punching him in the back of the head during the early morning hours outside a bar in Indianapolis.

The two men were in town for Gen Con, touted at the best four days in gaming. Indianapolis police refused to do anything about the incident. This prompted Hambly to file a lawsuit against Loter, funded by a GoFundMe legal fund organized by comic book artist Ethan Van Sciver.

Details of the settlement appear to be confidential. Hambly published the following video:

The video includes a scripted statement from Loter. He apologizes to Hambly and takes full responsibility for the incident. As far as apologies go, I think it sucked. It didn’t seem sincere. Loter looks to be grinning throughout most of the prepared statement. Loter goes on to say he attacked Hambly because of statements Hambly said about him. This would indicate Loter did not attack Hambly for his political views.

My guess is Loter was referring to when Hambly implied Loter was a pedophile. 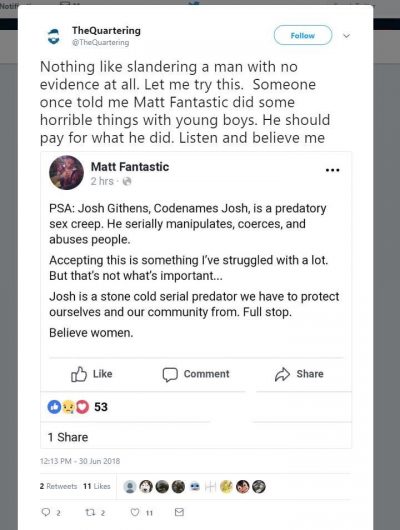 The video also includes a scripted statement from Hambly. He says he accepts Loter’s apology. He goes on to say he removed all of his videos about Loter and the incident. This is something Hambly has a lot of experience with deleting videos.

Did Matt Loter have to pay Jeremy Hambly money?

Because the out-of-court settlement is confidential, we’ll never know if any money changed hands. That said, I don’t think it did. Hambly didn’t suffer any damages. The attack didn’t require him to get medical treatment.

Hambly said he donated the remaining money in the GoFundMe legal fund to the Humane Society. Why didn’t he donate the money to an organization dedicated to defending the First Amendment?  The lawsuit’s stated goal was to set a legal precedent that political violence had a costly financial penalty.

Out-of-court settlements do not set a legal precedent.

It appears Hambly was the big loser in this. He wanted to create a legal precedent that political violence carried an expensive financial cost. He failed to do that. We now know the attack had nothing to do with political violence. It was because of what Hambly said about Loter. Both sides had to approve of each other’s prepared statements. That means Hambly had to agree to Loter’s assertion that he attacked Hambly out of anger over something he said about Loter. Therefore, the attack had nothing to do with Hambly’s politics.

I still think they should have gone on Judge Judy.