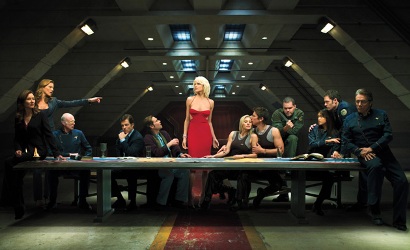 After watching the final episode of Battlestar Galactica over the weekend, I find myself wishing I hadn’t spent so much time watching the series these past few years.  If I had known it was going to end like it did, I would’ve preferred to have spent my time watching the Weather Channel.

I’ll skip the first part of the final episode and get right to the end where the whole series falls off the rails. The remnants of humanity, along with their Cylon friends, find themselves orbiting a blue planet that we know as Earth. It’s approximately 150,000 years ago. The most advanced humans are living in Africa, but they don’t have language yet.

Not even chirps, clicks, or whistles.

The humans and Cylons decide that instead of using their technology to make this new world (Earth) a better place, they are going to ditch everything they have and then each go their separate ways. They decide that what they all need more than anything is a clean slate.

They sent all of their space ships into the Sun. They then go and try to blend in with the primitive humans, breed with them, and even tech them how to speak.

I’m from California. I live in Maryland. I enjoy rooting against your favorite sports team, watching The Office, and listening to the musical stylings of Enya. Profound coffee drinker. A reader of science fiction and comic books. WordPress developer. Rideshare driver.

2 thoughts on “‘Battlestar Galactica’ final was a colossal disappointment”